Understand how you can know God personally.

Take the next step in your faith journey with devotionals, resources and core truths.

Help others in their faith journey through discipleship and mentoring.

Get the answers to frequently asked questions on Christian beliefs and practices.

Helping students know Jesus, grow in their faith and go to the world to tell others.

Mobilizing disciples online to reach people where they are

Learn more about our primary school and university

Be part of the LIFE Ministry family

Keep up with upcoming trainings, workshops and events

How we seek to journey together with everyone towards a relationship with Jesus.

What we believe about the gospel and our call to serve every nation.

Leading from values so others will walk passionately with God to grow and bear fruit.

Our board Members & National leadership Team

Learn more about our staff team and what they do

Reach us on any of our different platforms

Prayer points for each of the 47 counties of Kenya

Prayer points for each of the seven domains of society

Why is Prayer So Hard? 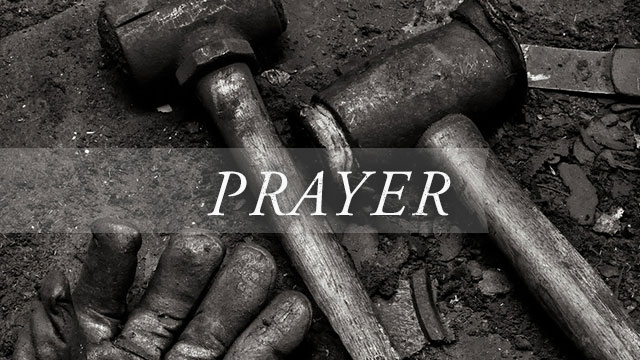 In the Bible, prayer is described as our divine and uniquely powerful weapon. It says prayer alone can change reality, heal the sick, and control the forces of nature. Prayer has brought back the dead. It keeps us alert, keeps us sober-minded, guards us against temptation, and releases our fears and frustrations.

Perhaps most significantly of all, prayer can hurt the enemy, restricting his activity and reclaiming hostages from his camp.

We have this powerful, superior weapon, and yet we don’t always use it. We are able to communicate with our Creator, but we don’t. We don’t pray.

Because prayer is hard.

Let me give you a few reasons.

When I was in a restaurant once with a group of guys, we decided to say a blessing before we ate. Since we were in the middle of a restaurant I said, “Why don’t we just say our own blessings today?”

So we bowed our heads, closed our eyes, and began to say our own grace. Now, my blessing is not just, “Rub-a-dub-dub, thanks for the grub. Yeah, God.” I take a minute while I say it, and so did my friends.

We forget, sometimes, the entire climate in which we live is against prayer. It seems like some act of desperation, or something you use as a sedative, but not a way of life. It’s just strange.

2. Prayer is a discipline.

Some writers describe prayer as though it’s an ecstatic experience; as if every time they pray, angels descend on them. But it’s not like that for me. Is it for you? I’m beginning to believe that for some people, no matter what they do, angels are descending on them.

I meet Christians who no longer pray, because it was a disappointment. Their experience is not what they expected. The bottom line though, is this: you’ve got to pursue prayer, first and foremost, as a discipline – not as an experience.

Prayer first will be a discipline.

Is it hard for you to pay attention when praying? I hope I’m not the only one. I admit that for me, invisible, formless, shapeless beings are hard to focus on. There are times I have gotten the feeling that maybe I’m talking to the ceiling.

4. There are more enjoyable things to do.

Other occupations cry louder for my attention. For most of us, we’re in too big a hurry to get something done because it’s more fun to take out the list of things to do and cross them off than it is to spend time in prayer.

5. You can get more done by yourself.

At least we think so.

A famous British general once said, “I’ve noticed that in battle, God always seems to be on the side of the army with the heaviest artillery.”

I think for each of us there has come some big event in life, and we forgot to pray. The event came and went, and went okay. Then we begin to suspect prayer wasn’t as crucial as we thought, and maybe we’d get more done if we quit wasting time on our knees, just got out there and did stuff.

6. Prayer is a universal failure.

Remember the story from John 8 of the woman caught in adultery? She’s brought before Christ who simply says to the people around eager to chastise her, “Let he who is without sin cast the first stone.” That sort of cut down the audience.

But He could have said it differently, by simply saying, “Let he who has a superb prayer life cast the first stone.” That would leave no one, too.

Everybody struggles with prayer.

Because of that, very few people are models for you, challenging and encouraging in this area. You’ll get together with another Christian and say, “I just have trouble praying,” and most of the time they’ll say, “Me too.”

We need more people who can say, “What’s the problem? Try this. Do this.”

We wonder, “What is prayer? What do I do first? Then what do I do?” As a result, when you see the word “prayer,” it calls to mind simply a feeling of frustration, discouragement or guilt. For many, prayer is not hard. It’s impossible.

Author Samuel Taylor Coleridge once wrote, “The act of praying is the highest energy of which the human mind is capable. Praying…with the total concentration of the faculties. The great mass of worldly men and of the learned men are absolutely incapable of prayer.”

Do you believe that’s true? After several years of praying, I agree.

I wonder what would happen if we were able to lift off the world’s machinery, seeing not your worldly accomplishments, but your spiritual ones.

What would you look like as people of prayer?

For a lot of us, we’d find our prayer lives were simply endless, boring supplications – a life of complacency, sleepiness, and suspicions that we’re wasting time. But it can be better. It can be different.

You know what we need? A short course on prayer. Fortunately, in the Sermon on the Mount, Jesus gives exactly such a lesson. Look at Matthew 6:5-13.

There you’ll find 3 qualities of prayer that we are to have.

Praying as the Lord taught will give us the groundwork for an improved prayer life, and help us use our superior weapon.

Edward MacHenry Baumn, a Civil War chaplain, was well known among his men because every day during the war he would arise at 4 a.m. and pray until 7 a.m. He once wrote, “The whole force of Bible statement is to increase our faith in the doctrine that prayer affects God. It secures favors from God which can be secured in no other way, and which will not be bestowed by God if we do not pray.”

Prayer is admittedly hard, but it is rewarding.

©2007 Cru Press, Campus Crusade for Christ, Inc. All rights reserved.  No part of this publication may be digitally reproduced, stored in a retrieval system, or transmitted, without the prior permission of Cru Press.

10 Ideas for Your Prayer Meeting

Why is Spending a Day in Prayer Important?

Why do we set time aside for a day of prayer? In this 3 minute video, Steve Douglass reminds us why a day in prayer is so important.

This prayer experience is intended to be adaptable to your prayer group. It can be as short as 40 minutes or extended to two hours, depending on how you use the optional sections.